Arne John Nixon was born in 1927 to a Finnish-American family in Frederick, South Dakota. He taught school in North Dakota, Washington State (where he taught Native American students), The Sudan, and in Tulare, California. After receiving a doctorate in education at Columbia University, he joined the faculty of California State University, Fresno, in 1961. Here he taught children's literature and storytelling for more than thirty years, organizing programs that attracted tens of thousands of people. Programs he sponsored, featuring dozens of America's best-known authors and illustrators, helped to establish Fresno State as a center for the study of children's literature.

A sought-after speaker, Dr. Nixon told stories to audiences throughout California and around the world. Wherever he traveled, he bought children's books. He donated his collection of 22,000 volumes to the Henry Madden Library in 1995, founding the Arne Nixon Center for the Study of Children's Literature. When he died in 1997, he left the library a generous bequest in his will to ensure that the Center would perpetuate his work.

People who listened to Arne Nixon's stories encouraged him to write his own books for children, but he always declined. "It is the function of some people to be a lamp and some to be a mirror," he explained. "I have been very pleased to function as a mirror of others' work." Some would say it was a magic mirror, one that changed the lives of his students and audiences. His spirit and his work live on through the books he collected and loved, now available to all in the Arne Nixon Center. 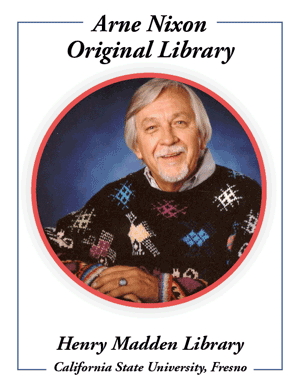