Thomas J. Ebert, a Fresno State reference and government documents librarian from 1970 to 1996 and Associate Vice President for Academic Personnel from 1996 to 2005, has spent a lifetime traveling in the American West and collecting books related to the frontier. Since 1993 Ebert has donated more than 2,000 books to the Madden Library on American frontier life ranging from the first settlements in Santa Fe and Jamestown to the history of California. The books he has collected and donated over the years are now part of the Thomas J. Ebert American Frontier Collection. These books, from university presses, western historical societies, museums, and specialty presses, comprise one of the largest American frontier collections in California. The Madden Library holds many titles not found elsewhere in the California State University system.

One focus of the collection is the history of the United States Army in the West. Biographies profile generals George Custer, George Crook, and Nelson Miles, and lesser known, but equally important, figures like Wesley Merritt and Ranald MacKenzie. Some books study the cavalry and infantry units staffed by African Americans known as “Buffalo Soldiers.” Histories of western forts and studies of military equipment and tactics will inform students who want to learn from the army’s successes and failures in the West. Other titles deal with the struggles of Native Americans to retain their culture and identity. The collection includes biographies of Red Cloud, Crazy Horse, Sitting Bull, Victorio, Geronimo, and Cochise. 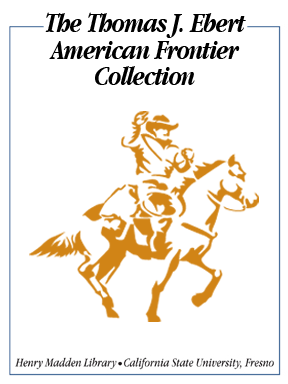